An exceptional task to restore their ordinary life to extraordinary people

It’s happening everywhere! Pushing back human and scientific boundaries to achieve our wildest dreams. Some are aiming for the moon and others want to extend human life even longer.

The Wandercraft team’s adventure fits neatly into this register. It is uniting its vital spark into this dream which is now within its grasp: giving back the possibility of an “upright” life to 70 million people whose only horizon today is seen from a wheelchair. This is how it is for the brother of Nicolas Simon, a student at the Ecole Polytechnique (Paris-France).

Nicolas, the Chair of the Robotics Club, is determined to move the goalposts.

For nearly 40 years robots have simulated walking but in 2010, ten years after they appeared, the first generation of exoskeletons did not give disabled people a satisfactory answer to their need for mobility and independence. The reason being that they were unstable, so crutches had to be used at the same time.

Nicolas is convinced that the solution lies in providing balance on different surfaces. He is working on an innovative concept: an exoskeleton adapted to the morphology of the legs and pelvis, which can walk like a human, self-stabilizing and, most importantly, able to restore the ability to walk for disabled people. With that will come independence and well-being. Finally able to make continuous progress using everything new that Artificial Intelligence can offer due to Deep Learning algorithms.

Alexandre Boulanger and Mathieu Masselin, two friends and robotics engineers, rushed to join him with the support of a serial entrepreneur, Jean-Louis Constanza, who has a disabled son. In 2012 the small team decided to become a start-up. The aim: getting time and talent resources and then the finances that they needed.

7 years on a huge step was taken, resulting from close collaboration with the best teams of university robotics specialists, medical teams and patients from the most advanced rehabilitation centres and with the support of their very first investors. Atalante, the first exoskeleton not to need the use of crutches, intended for rehabilitation centres, was developed, tested, CE-certified and marketed. From 2019 the first mass produced appliances have been used in the most advanced rehabilitation departments in Europe[1].

The patients and carers using it applaud its ability to change the prognosis, treatments and the way rehabilitation medicine is practised.

Using this unique platform, at the end of 2021 the Wandercraft team succeeded in developing the first exoskeleton for everyday life. A pre-clinical prototype in a significantly smaller format that goes by the name of “Projet EVE”. The dream come true.

Wandercraft has filed thirty international and exclusivity patents for a proprietary technology. It is recognised worldwide for being at the forefront in the robotics of independent dynamic walking[2]. The result: it received the Galien Medstartup 2020 prize for the best Franco-American MedTech collaboration[3].

Now the company and its one hundred members of staff have a double objective:
• Preparing to become an international forerunner in MedTech working on device certifications and obtaining approvals in early adopter countries to ensure its coverage by social security systems; at the same time developing its production process to manage increased volumes and reduce costs…
• Most of all, to make the first personal version of the self-balanced exoskeleton available to the man in the street quickly. A long-awaited solution as the Department of Veteran Affairs in the US has already agreed[4] to finance 17,000 personal exoskeletons.

2022, the dawn of a revolution in the daily life of millions

Wandercraft is embarking on the final stage: testing and finalising “Projet EVE”s development to reach the Minimum Viable Product stage, designed with input from patients and their families:

• an appliance that can be put on or taken off quite independently. It offers the potential of walking and sitting down anywhere, giving true indoor- outdoor mobility, at home and outside
• an appliance with guaranteed user safety, fall protection and reliability in all circumstances, particularly with a stand-alone battery over the day, backed up with switchable charging
• an inspiring user experience: no crutches, so hands-free, and design quality
• a price close to that of a medium range car, due to mass production, providing a device that has approval from health authorities which will provide funding for it.

Responsible investment in its fullest sense

At the end of 2021 Wandercraft raised financing[5] of $45 million to accelerate the marketing of this initial personal exoskeleton and facilitate its deployment in the United States.

This is when Sofiouest joined the group of investors[6] supporting the company with the founders and the team.

This landmark investment in a company where its development will allow restored quality of life for millions of people is once again an illustration of Sofiouest’s commitment to human and socially responsible development in line with the human values[7] of the Group to which it belongs.

[2] Wandercraft has received many prizes: in 2018 the Robotics category of the Handitech Trophy and the 2020 Technological Innovation Award awarded by Frost & Sullivan.

[4] Subject to approval from the American Health Authority, the FDA.

[5] It is a Series C, arranged by Quadrant and BPI France. It follows successive fundraising: €1 million when the company was created, then €4 million in 2015 and 15 million in 2017.

[6] Among which in particular are BPI France, LBO France and Quadrant. 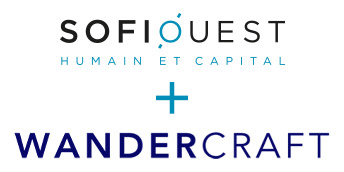